The last two years have seen an unprecedented number of protests erupt in many US cities and across the world. While the causes of the conflicts have varied – contested elections, Black Lives Matter and anti-Covid restrictions to name just three – they have one thing in common – large gatherings of emotionally charged civilians to whom it is very difficult for the police to communicate with. But thanks to a new ‘Superhailer’ the task of safely and accurately projecting clear messages to large audiences is made much easier. 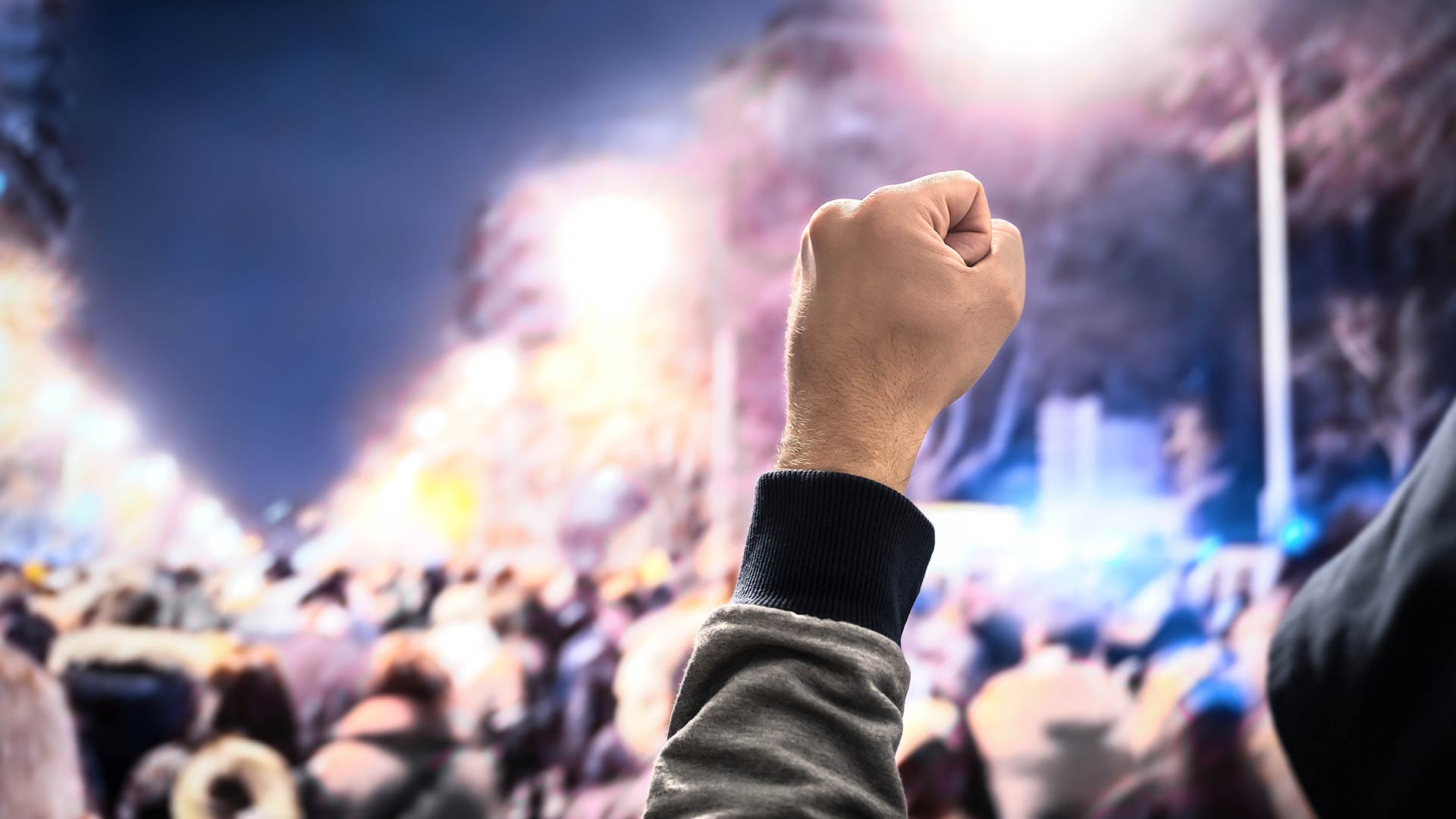 “In riot situations it’s loud and chaotic, and it’s hard to hear anything clearly. The police have a very difficult job to talk to the crowd. The best way to calm tension is to regularly disseminate information and let protesters know what’s going on. The messages don’t always need to be about the protest itself, they could also be about safety information – for example people at the front of demonstrations being crushed by crowds at the back. The Superhailer is a very effective way of delivering that information in a safe, loud and clear way – and letting people know what they should do.”

So says Ben Greving, veteran of the elite 82nd Airborne Division and firearms instructor, who is now an expert on specialist equipment for the military and federal, state and local law enforcement agencies. In a recent interview Greving, who is responsible for supplying equipment to 10 states in the US for leading supplier Federal Eastern International, said: “Superhailer is needed in our large metropolitan areas – because that’s where all the riots keep happening – and that’s where the information needs to be disseminated to calm things down.”

Superhailer employs the latest patented technology to project the spoken word, prerecorded messages or attention-grabbing sounds over tremendous distances of up to 800ft/250m. It can project sound with breathtaking clarity at very high – but always safe – volumes and with incredible directional accuracy. Its ability to be loud, clear and accurate means Superhailer can cut through the ambient noise, even over great distances and get its vital messages through.

“While there are other loudhailer systems on the market I know from experience that they rarely get used, because they aren’t always safe in the situations they are needed to be used,” continues Greving. “There is a ton of litigation out there, with claims that messages have been transmitted too loud, and damaged people’s hearing. But when I saw Superhailer demonstrated at the International Association of Chiefs of Police (IACP) conference I knew that it was a safe solution for the riots and civil disorder we see all too often now.” 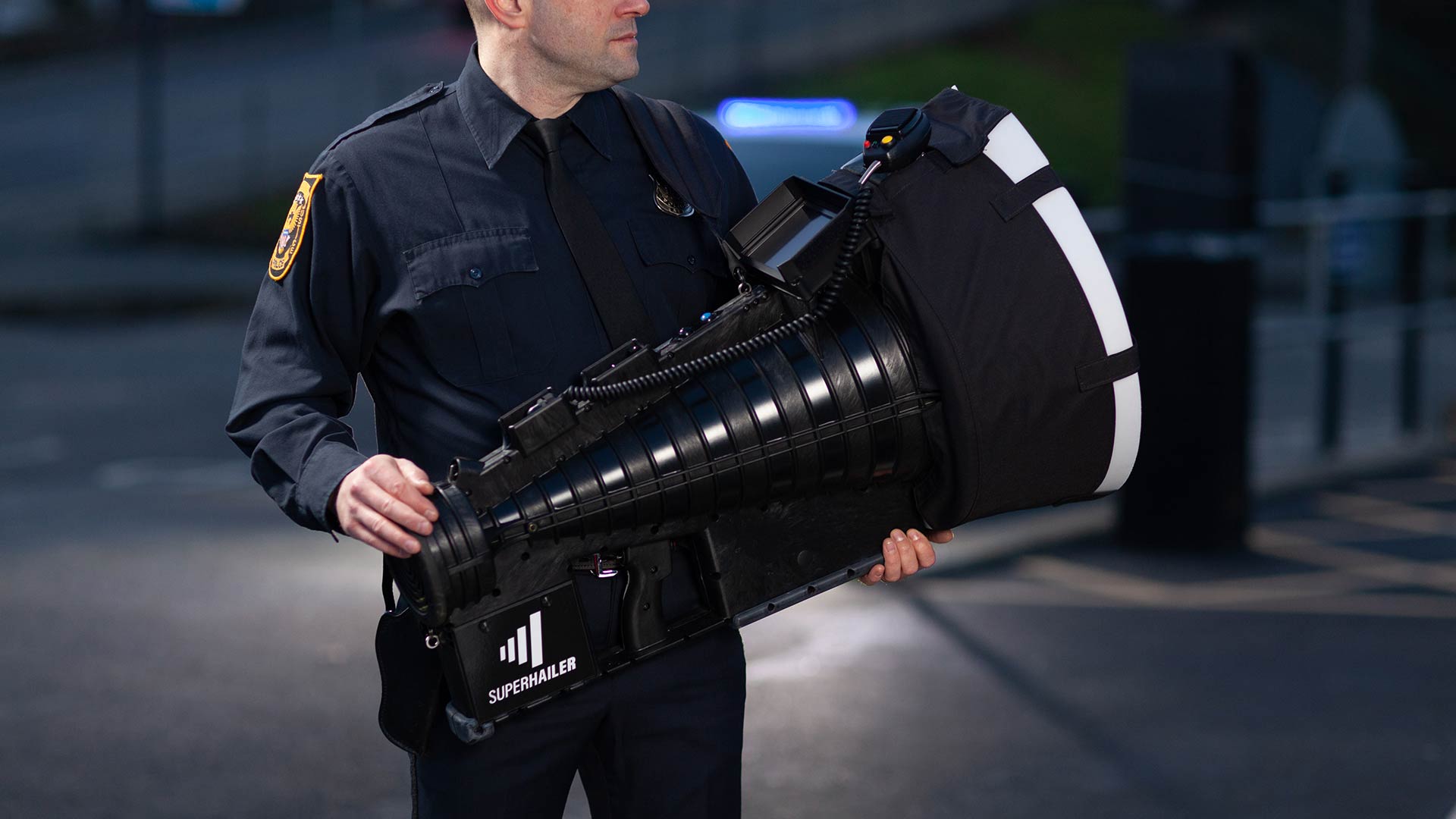 Loud and compelling, but not harmful
Superhailer is designed to be always safe and never expose individuals to volume levels that may impair hearing. The volumes it projects are loud and compelling, but not harmful. Operators simply aim the device at the desired person or people they want to communicate with and press the button. At this point an in-built laser range finder instantly measures the distance to the target. This information is fed to the onboard safety limiter that, in only a quarter of a second, determines what the safe volume level should be before any sound is broadcast. In any event, the system prevents the maximum volume people exceeding 112dB LAeq – well within sound levels generally accepted as being legally permitted. Superhailer is believed to be the only device of its type to work within current workplace sound legislation – volumes louder than that constitute a ‘use of force’.

Verifiably safe
“Even if there were to be litigation,” says Greving, “you automatically have access to the video, location and sound data – from the riot to show the system did exactly what it was supposed to do, and in a safe manner. The system not only records what happened during use, but also records 30 seconds before-and-after the device is used, to give context to the application.

“In my opinion, with riots and civil disturbance becoming more common, every public safety division and group should have a Superhailer – or at least access to one. It’s accurate, loud and clear – and most importantly – safe.”