Aimed at the emergency services, Superhailer is a high-powered wearable communication tool that can broadcast crystal clear live spoken word, prerecorded messages and alerting sounds over extreme distances – of up to 250m.

Clear communication saves lives – but achieving that in emergency situations where there is a cacophony of other noises or large distances to obstruct clarity makes that very difficult. Not any longer, thanks to a revolutionary loudhailer that employs the latest patented technology to project the spoken word, prerecorded messages or attention-grabbing sounds over tremendous distances – of up to 800ft/250m. Superhailer is a wearable high powered acoustic communications tool that can project sound with breathtaking clarity at very high – but always safe – volumes and with incredible directional accuracy.

The unit is designed to be, in effect, a wearable loudspeaker – believed to be the loudest in the world. Its ability to be accurate, safe, loud and clear means Superhailer can cut through ambient noise, even over great distances, in order to get its vital messages through. The advantages of this are manifold, including grabbing people’s attention when de-escalating demonstrations, safely executing evacuations, lifeguards warning swimmers of treacherous waters, coastguards communicating with small vessels, mental health interventions, search-and-rescue operations and calming civil disorder. It can also be used in non-emergency situations, such as managing sporting events, parades and other large gatherings.

Providing persuasion, advice & warning – all at a safe distance

Unlike some other loudhailers that can be harmful to people’s hearing if used incorrectly, Superhailer is designed to be always safe and never expose individuals to volume levels that may impair hearing. The messages it projects are loud and compelling, but not damaging to hearing – to the user, bystanders or the target individual/s. 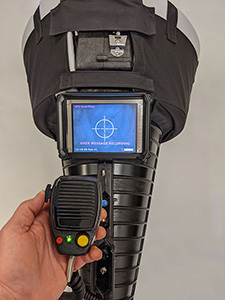 Also unlike other loudhailers, Superhailer is designed so that the operator need not decide upon the volume level required. They simply aim the device at the target individuals and press the trigger button – at which point an inbuilt laser range finder instantly measures the distance to the target. This information is fed to an onboard safety limiter that ensures the maximum volume the target hears does not exceed 112dB LAeq – well within sound levels generally accepted as being legally permitted. A lower maximum limit can be set if the user prefers. The objective is to communicate effectively without hurting anyone, it only needs to be loud enough to achieve that aim. Superhailer is believed to be the only device of its type to work within current workplace sound legislation – volumes louder than that constitute a ‘use of force’.

Another key feature of the Superhailer is its ability to direct its messages in a very tight beam of penetrating sound. This allows the user to selectively and precisely target an individual or individuals, even at great distances. Its narrow sound cone emits a beam of sound between just +/-7.5 degrees ahead of the device. Outside of this beam the volume drop-off is rapid. Outside of the beam bystanders can hear the device, but at a low level. Step into the beam, however, and the sound intensity increases dramatically. Because of its ability to direct sound accurately and safely, operators can talk at a comfortable level to those around them, even when Superhailer is operating at full power.

Superhailer automatically records video, location and sound data when in use. The unit’s video camera provides a live feed to the operator via a clear LCD display. Whenever the device is activated, the footage from the camera is recorded onto an internal removable USB drive. Whenever the device transmits an audio broadcast the previous 30 seconds of camera footage is included in a video file to provide context-of-use. The following 60 seconds is also recorded. 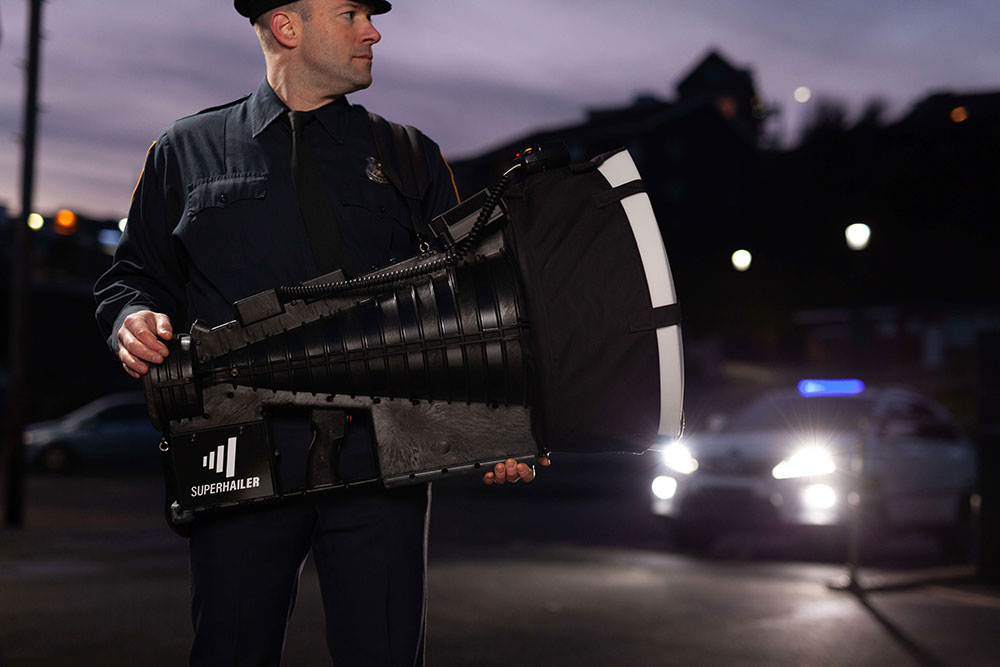 The unit incorporates GPS that – when combined with the range finder and on-board exposure calculations – creates a complete record of use for each trigger press: providing a comprehensive audit trail that may prove invaluable after the event.