The news that the NYPD has settled with demonstrators and photographers subjected to blasts of high-pitched beeps from a handheld long range acoustic device (LRAD) comes as no surprise to Superhailer’s chief executive Matt Henry. “Unchecked, some of these devices can emit sounds of up to 137 decibels – way beyond the 130 decibels considered to be a human’s pain threshold. Powerful loudhailers have many advantages in helping communicate effectively in emergency situations, but without the correct safety systems installed, they also have the potential for harm.” 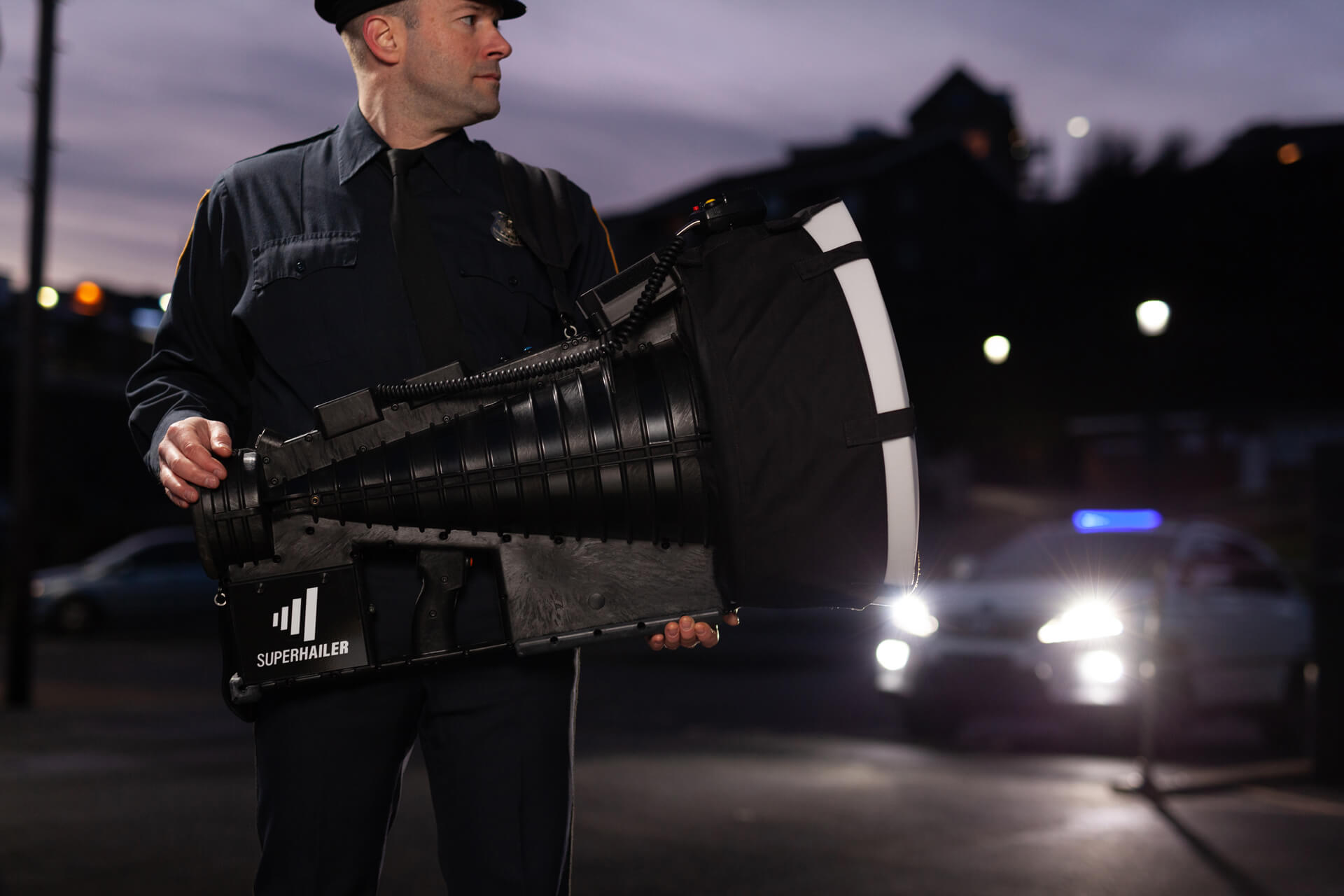 According to the lawsuit, during the demonstration in 2014 police officers used an LRAD produced by Genasys Inc. around 57th Street and Madison Avenue in Manhattan. They allegedly turned it towards protesters who were within 10 feet while ‘repeatedly firing its so-called ‘deterrent’ tone’. The high volumes at such close proximity were cited as the cause of the claimed injuries.

“Operators shouldn’t be the ones who determine the volume emitted. Safety systems are available that automatically and immediately adjust the volume within the cone of sound emitted by the device – so that it is appropriate to the distance of the target audience,” continued Henry.

Onboard volume safety limiter
The safety device fitted to the Superhailer is believed to be unique. Operators simply aim the device at the person or people they want to communicate with and press the button. At this point an in-built (eye-safe) laser range finder instantly measures the distance to the target recipient of the message or sound. This information is fed to the onboard safety limiter that, in only a quarter of a second, determines what the safe volume level should be – before sound is broadcast. In any event, the system prevents the maximum volume people hear exceeding 112 decibels – well within sound levels generally accepted as being legally permitted. Superhailer is believed to be the only device of its type to work within current workplace sound legislation – volumes louder than that constitute a ‘use of force’. 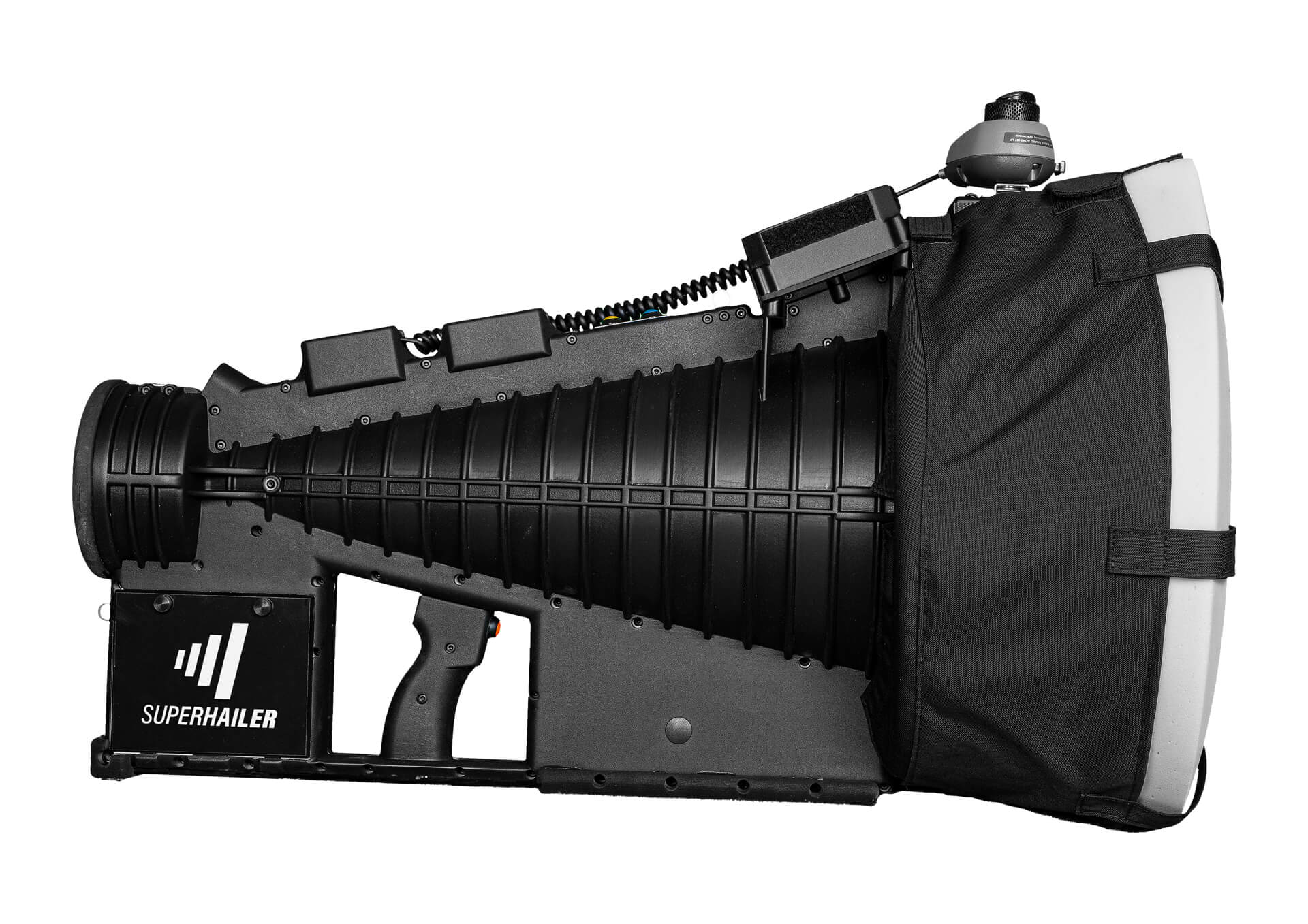 “If NYPD had been using a tool like Superhailer they wouldn’t have been able to operate at excessive volumes,” continues Henry. “Not only that, thanks to the inbuilt video, location and sound data captured when in use, the NYPD would have had ample evidence to prove what they did was safe and appropriate, thereby countering legal challenges about their use.”

Loud and compelling – but always safe
“With the proper inbuilt safety systems loudhailers are safe and don’t expose individuals to volume levels that may impair hearing. The volumes they project are loud and compelling, but not harmful,” concludes Henry. “Properly equipped, powerful loudhailers are a force for good. So it’s unfortunate that legal cases arising from claims of injuries caused by devices not fitted with safety protection – as here in New York – obscure the benefits these tools offer to the emergency services in their difficult task of safely and accurately projecting clear messages to large audiences.”

Notes to Editors
Superhailer employs the latest patented technology to project the spoken word, prerecorded messages or attention-grabbing sounds over tremendous distances of up to 800ft/250m. It can project sound with breathtaking clarity at very high – but always safe – volumes and with incredible directional accuracy. Its ability to be loud, clear and accurate means Superhailer can cut through the ambient noise, even over great distances and get its vital messages through.